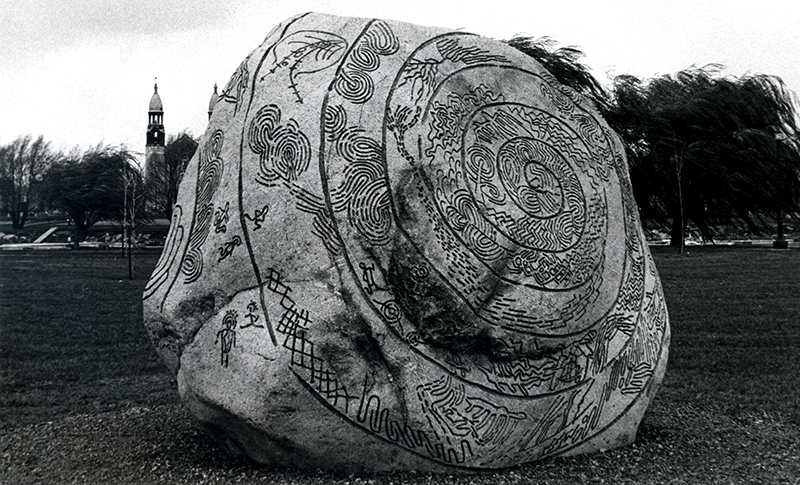 A major figure in the fields of conceptual art, land art and photo montage, Bill Vazan studied visual arts at the Ontario College of Art (now OCAD University) in Toronto and the École des beaux-arts de Paris before completing a BA at Sir George Williams University (now Concordia University). He co-founded Montreal’s Véhicule art gallery in 1971 and began teaching at the Université du Québec à Montréal in 1982. In 2010, he received the Prix Paul-Émile Borduas in recognition of his exceptional career, during which he has frequently exhibited his work throughout North America and Europe. Inspired by megalithic monuments, Vazan’s stone sculptures are covered with engraved zigzags, lines and curves – markings that trace imaginative pathways resembling a blend of handwriting and graffiti. Both the nature of his installations and the diversity of their sites, whether in Quebec, South America, Egypt or Sweden, reflect the artist’s fundamental belief in the profound and eternal connection between nature and mankind. Ironically, while symbolic of permanence, they remain vulnerable to vandalism and to the elements. Vortexit was a prime example of his work: an assemblage of embellished menhirs and a dolmen completed for the 1988 Symposium de Lachine. After years of weather damage, the installation had to be disassembled in 2008, though a very similar Vortexit II took its place in 2009. All that remains of the original are rubbings on paper of the engravings it bore; these were donated by Vazan to the Musée de Lachine.