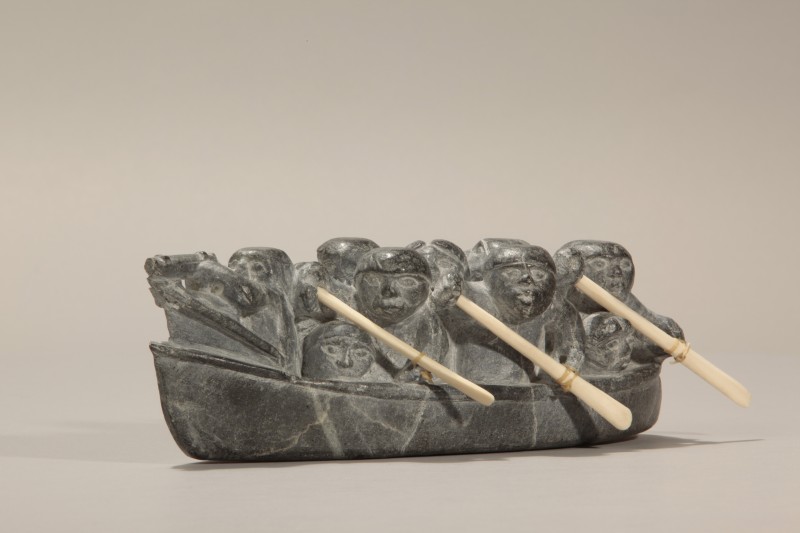 Joe Talirunnilik is an artist/sculptor born either near the Inuit camp of Grande rivière de la Baleine, Quebec or north of Puvirnituq, Quebec in the Inuit camp of Neahungnik. The varying versions according to sources: the artist confirmed being born in 1906, but the Canadian Encyclopedia and the Department of Indian and Northern Affairs in Ottawa believe that he was born between 1893 and 1899. During his youth, Joe Talirunnilik experienced an unconventional lifestyle for an Inuit because his father worked with mining prospectors. In the 1950s, he moved to Puvirnituq and learned the art of printing and drawing. He is one of the founders of the printing shop in Puvirnituq, established in the 1960s. A few years earlier, he began a sculpting career by creating primarily migration scenes involving umiaks (large, traditional Inuit and Yupik boats). His work is characterized by traditional Inuit life, his childhood, daily life, hunting, animals (particularly owls), life in camps, etc. His most famous sculptures are called Migration and are based on a memorable experience from his childhood. He had such a unique genre that his pieces were said to be done in the “Joe” style. Despite a very lucrative career in sculpting and printing, Joe Talirunili was honoured only after his death in 1976. After his passing, his work Migration, or Bateau de Joe, was depicted on the 14-cent Canadian stamp. Finally, in 2006, one of the Migration series was sold at Waddington’s auction for a total of $278,000—a record price for an Inuit work.