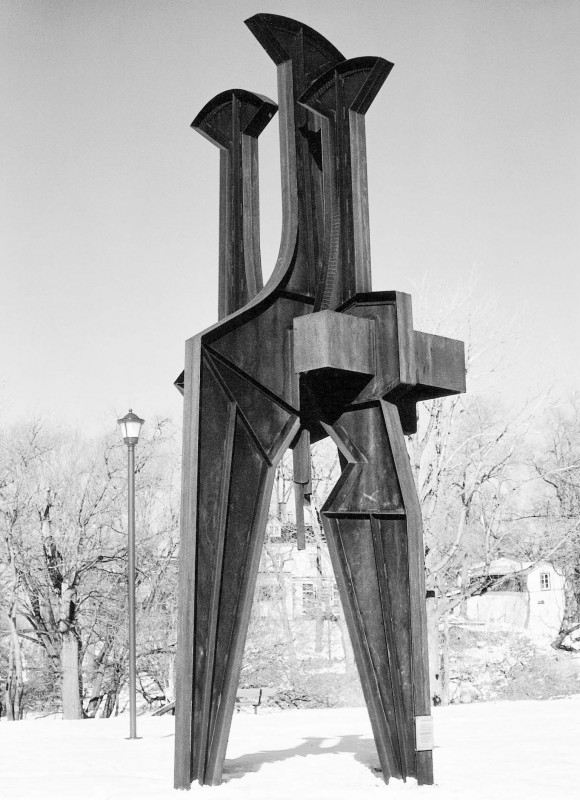 The Sculpture Symposium in Terrebonne took place on the historic site of Île des Moulins in 1978 and was coordinated by Guy Robert. The event was financed by the City of Terrebonne, the Ministère des Affaires culturelles du Québec (owner of the artwork) and the Canada Council for the Arts. This provincial symposium took the form of a competition and received 80 proposals. Among them, 25 were submitted to a public vote after being selected by a jury consisting of Hubert Durocher (sculptor), Louise Letocha (director of the Musée d’art contemporain de Montréal) and Jean-Claude Leblond (journalist). Seven proposals were selected: those of André Geoffroy, Jacques Huet, Richard Kode, Robert Nepveu, Gilles Payette, Denis Poirier and Robert Saucier. Several sociocultural activities were organized in tandem with the symposium: workshops on art, pottery and batik; exhibitions; performances; sidewalk cafes and field parties. Pierre Gaudette and Jocelyn Denault-Dupras directed a film entitled Le symposium de sculpture de Terrebonne 1978 (1978) that presents a discussion between the participating sculptors. The discussion focused on the sociocultural goals of the symposium and the factors that may have explained why they were not attained. The sculptors also made recommendations for future symposiums.