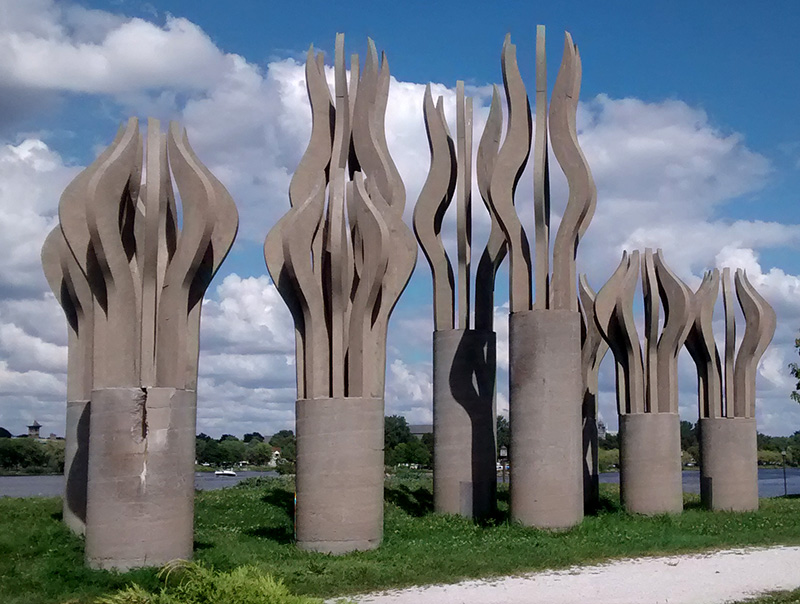 Robert Roussil became a professor of stone sculpture at the Montreal Museum of Fine Arts’ School of Art and Design shortly after enrolling as a student in 1945. In 1947, he founded the studio La Place des arts, a hub for young artists looking to break away from academic constraints. He lost his teaching post in 1949 after causing a scandal with La famille (“the family”), a sculpture that was considered obscene and placed under lock and key. This act of censorship was only the beginning of Roussil’s strained relations with institutions, gallery owners and a good many critics. In 1956, he settled in France in Tourrette-sur-Loup (renamed Tourrettes-sur-Loup in 1970). His schematized sculptures, those made from stone and particularly those made from wood, have had an undeniable role in the development of Quebec sculpture. In the 1970s, his work took a decisive turn with modular art. Seeking a global approach to housing problems, he focused on abolishing the boundary between sculpture and architecture and envisioned creating “habitable sculptures.” In 1983, he returned to Quebec for a time and set up a studio near Mirabel in Belle-Rivière; intended as a site for arts events, it was later destroyed in a fire caused by arson. Despite all of his setbacks, Roussil ultimately exhibited his work in Quebec, throughout Europe and in South America. In 1996, Château de Tourrettes-sur-Loup presented a retrospective of his work.