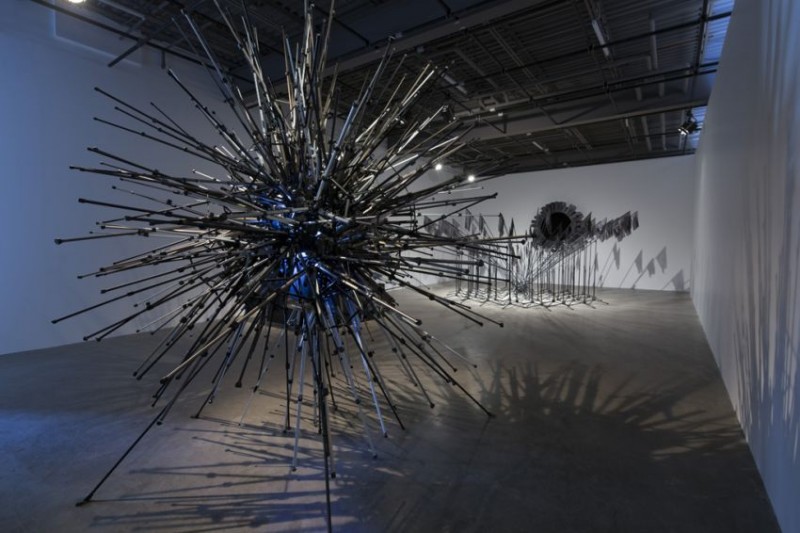 Michael A. Robinson, Subject to scrutiny, 2015.

Born in Germany, Michael A. Robinson lived in Ottawa before settling in Montréal at the beginning of the 1990s. He earned a B.F.A. from Concordia University in Montréal and a master’s degree in studio arts from the Université de Paris/Panthéon-Sorbonne. Robinson is a multidisciplinary artist. His work is rooted in a critique of art history that extends to modern aesthetics. With this frame of mind, he designs installations that combing sculpture, drawing, and video. His work often addresses themes concerned with the creative act and the conditions in which it emerges in contemporary visual culture. Consequently, Robinson often questions the artist’s role and status as a creative being. Since 1994, his pieces have been exhibited several times in Québec, Canada, France and the United States. Notable among his many gallery installations are Trompe le monde, exhibited at OPTICA (Montréal, 1998), and Avancer dans le brouillard, presented at the Musée national des beaux-arts du Québec (2004). More recently, Robinson showed his work at an exhibition entitled Either/And at ArtHelix (Brooklyn, 2016). This piece was preceded by Black Period, exhibited at L’Oeil de Poisson (Québec City, 2015) and The Origin of Ideas, exhibited at YYZ Artists’ Outlet (Toronto, 2014). Notable among the many collaborative exhibitions in which he has participated are la Chose en soi (Musée régional de Rimouski, 2017); Other Worlds, presented at the Washington Project for the Arts (2016) and Dypthong, presented at the Shirley Fiterman Art Center (New York, 2015). His work belongs to a number of public and private collections, such as the that of the Musée d’art contemporain de Montréal, the Musée national des beaux-arts du Québec and the Canada Council Art Bank. Michael A. Robinson’s work has also been exhibited by Pierre-François Ouellette Art Contemporain, Parisian Laundry and the Galerie Antoine Ertaskiran, three galleries located in Montréal.