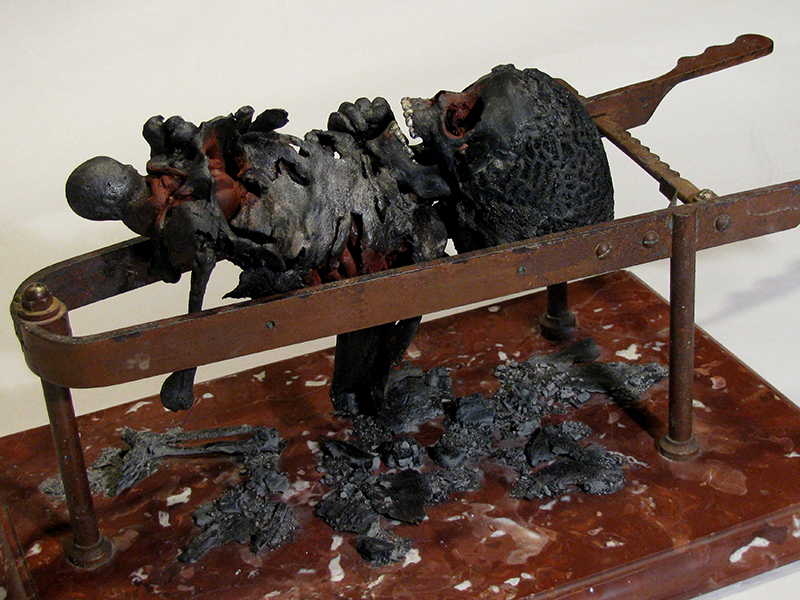 Mark Prent was born in Poland but grew up in Montreal, where he earned a BFA from Sir George Williams University in the 1970s. From the very start of his career as a sculptor, he caused an outcry amid a number of critics and in the Toronto and Montreal public with the shocking hyperrealism of his bloody scenes and grotesque, mutilated bodies. Though he was accused of encouraging unhealthy voyeurism, he did receive recognition for the aesthetic relevance of his work and would be awarded numerous prizes in Canada and in Germany; he remained for two years in Berlin (1975-1977), for example, after being invited by the Deutsche Akademischer Austauschdienst to be an artist in residence. His works can now be found in prestigious museum collections around the world. In order to ensure the realism of his figures, Prent developed an innovative casting technique using polyester resins; their toxicity, however, forced him to explore other combinations of materials. In 1983, while living in Vermont, he industrialized non-toxic products sold to artists and opened an educational centre for casting. Since 2005, he has been using cinematography to animate his sculptures and give them a dimension of performance, one that draws viewers into the sombre, scarcely exaggerated twists and turns of the horrors committed by humans.