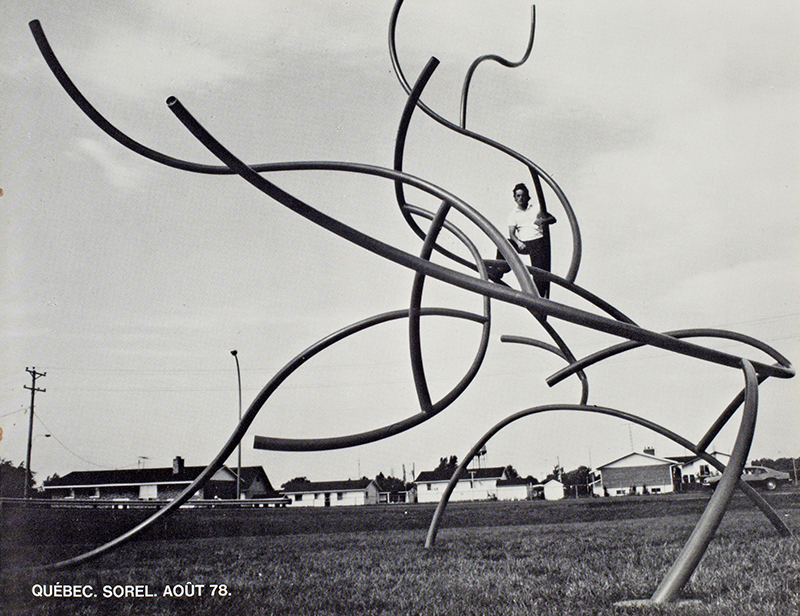 Robert Poulin is a sculptor, artistic director, curator, editor and gallery owner. After studying art in Montreal, he pursued his research in Copenhagen (Denmark, 1971) and Warsaw (Poland, 1972), where he presented a solo exhibition at EL Gallery in Elblag. In 1975, he spent time studying in Japan and held a solo exhibition at Gallery 5610 in Tokyo. On his return, he completed a steelwork apprenticeship at a factory in Sorel (1976-1979) and presented another solo exhibition at the Musée d’art de Joliette in 1979. Since then, he has only continued to create artwork and to become involved in the visual arts milieu. His willowy, ethereal works are often colourful and push the boundaries of materiality; as early as the 1970s, he had produced relatively ephemeral sculptures. In 2009, he completed five wooden sculptures (in collaboration with Laurent Bouchard) for the garden adjoining the Robert Bourassa Library, which houses the Galerie d’art d’Outremont. Always generous with his time and eager to share his creative experience, he has been giving sculpture workshops for several years, upon the suggestion of the Galerie d’art d’Outremont, at Outremont’s Parc Saint-Viateur alongside Michel Beaucage, who teaches painting.