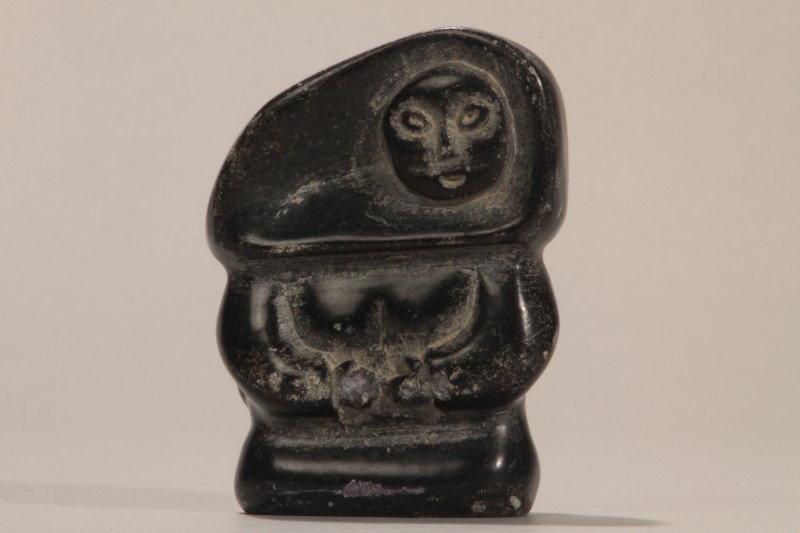 Born in the region of Inukjuak (Quebec) in 1930, Annie Niviaxie moved to Kuujjuarapik (Quebec) following her marriage to Josephie Niviaxie and died there in 1989. Recognized for her work in sculpture, she also made dolls and baskets, and made tapestries with felt and sealskin. The latter, dating back to the 1970s and 1980s, have often been done in collaboration with Mina Napartuk and sometimes with a third partner, Malaya Crow. As for sculpture, she learns the techniques by observing the artists in her community. Her works of the 1960s often show several figures with voluminous proportions and female contours, rounded, represented in complex poses. This corpus is considered by many Inuit art specialists to be the most creative and accomplished of his artistic practice. Subsequently, her pieces become more and more schematic and present mostly solitary characters in static attitudes. From the 1980s, financial difficulties led her to produce particularly simplistic sculptures in order to sell them more easily. Niviaxie’s work has been featured in numerous national exhibitions, including “Inuit Sculpture: Masterpieces of the Canadian Arctic,” presented in 1965 at the New Brunswick Museum (Saint John), and the Canada Pavilion at Expo 67 in Montreal. Many of her pieces can be found in important Inuit art collections, such as the National Gallery of Canada (Ottawa), the Glenbow Museum (Calgary) and the Winnipeg Art Gallery (Winnipeg).