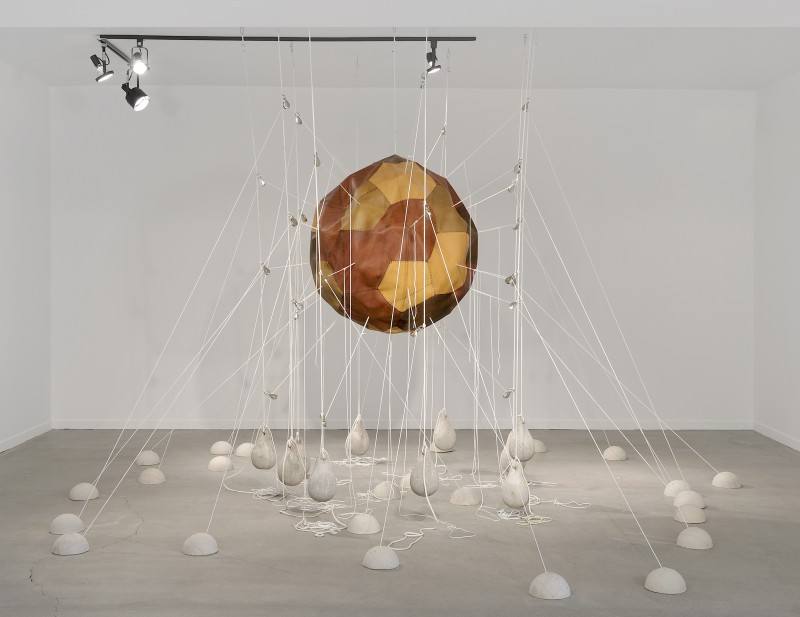 Born in Saint-Éphrem-de-Beauce, François Mathieu earned two bachelor’s degrees, one in philosophy, the other in studio arts, as well as a master’s degree in Quebec studies. He worked as a part-time lecturer at the École des arts visuels at Université Laval and in the department of design at the Collège Garneau in Quebec City. His artistic work is particularly marked by a mythic vision of machines – machines that, contrary to the imagery typically surrounding them, inspire dreams and are imaginary in essence. Whether flying machines, giant soccer balls, brass domes or wooden igloos, the artist’s goal is to create an object that can generate a poetic space of which the primary function consists in simply existing, uselessly present in the world. Made of wood, concrete, leather or other materials, his pieces – who more often than not take the form of a sphere – intrigue and seduce. His work has been shown in more than thirty solo and collaborative exhibitions in Canada, Mexico and Belgium. His collaborative exhibitions include 2014’s 6th Biennale national de sculpture contemporaine in Trois-Rivières, and 2012’s Manif d’art 6, Quebec City’s biennial, which had the theme of Machines – The Shapes of Movement. His more recent solo exhibitions took place in 2014, at Regart in Lévis, and in 2016, at L’oeil de poisson in Quebec City. François Mathieu is also known for his public works of art, including those installed in Paspébiac, (Mer de monde) Installé à demeure (2004), in Lévis, Les fûts (2016), as well as at Rivière-du-Loup, Donner du chemin (2014).