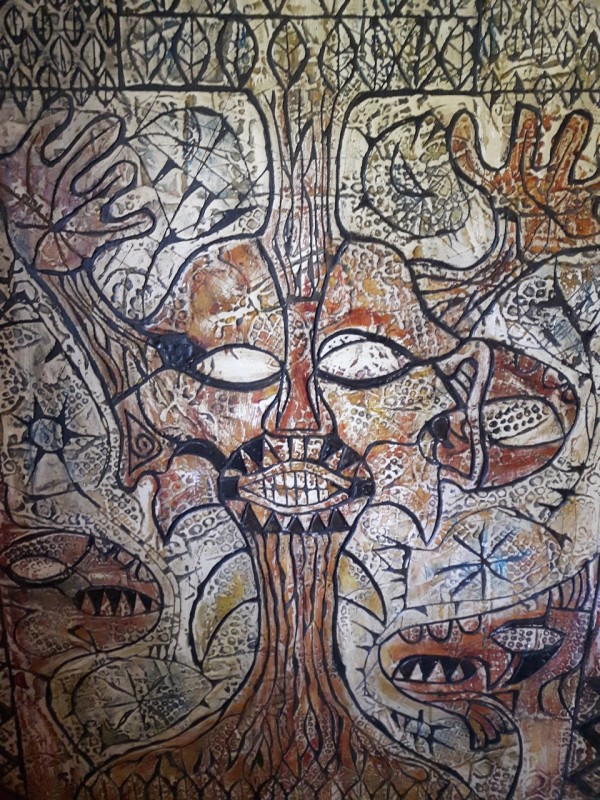 Born into a working-class family of mixed Amerindian descent, Montreal native Jovette Marchessault is a self-taught artist known primarily as a novelist and playwright, but she was also a painter and sculptor. She had to work in a textile factory and take on various small jobs at a young age to earn a living. Beginning in the 1970s, she fully accepted her vocation as an artist. She showed her frescos, masks and “telluric figures” in around thirty solo exhibitions in Quebec City, Toronto, New York, Paris, and Brussels. Her work in the visual arts is rooted in of the aesthetics lauded by the Galerie des Nanas (Danville, Quebec City), namely art that is feminist, engaged, or simply outside of academic trends. In 1975 she published the first part of a fictional trilogy, Comme une enfant de la terre. The first novel, Le Crachat solaire, won her le prix France-Québec in 1976. Jovette Marchessault’s texts would go on to occupy the theatre scene, especially thanks to the actress and director Pol Pelletier, who staged Les Vaches de nuit at the feminist Théâtre experimental des femmes in 1979. Several other texts would be performed at the theater in the 1980s. Her play Le voyage magnifique d’Emily Carr brought home the Governer General’s Award in1991. Jovette Marchessault also taught theatre classes at UQAM and collaborated with several publications, including Le Devoir newspaper, La Vie en rose and Châtelaine magazines, and La Nouvelle Barre du jour literary review.