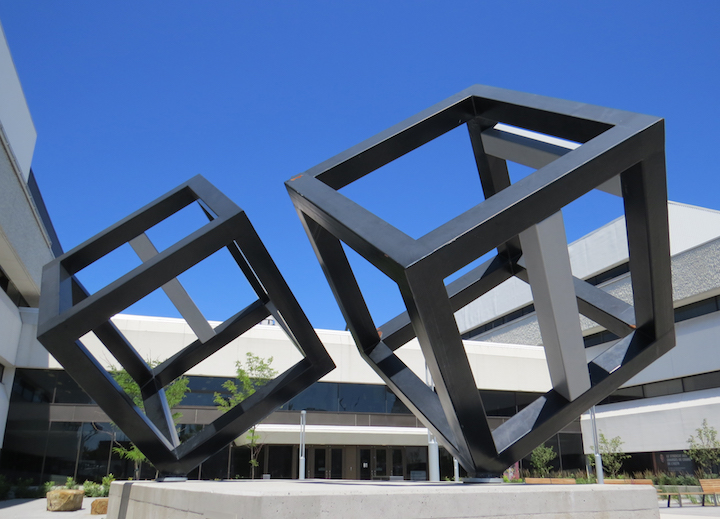 Born in 1939 in Trois-Rivières, Pierre Landry has demonstrated a great interest in sculpture, from a very early age. In 1959, he began his artistic training at the École des beaux-arts de Montréal and specialized in sculpture and artistic pedagogy. Through those years, he developed an interest in art history while traveling to the United States, Mexico and Europe. He then completed in 1969 a specialized training program in cast metal, in Elliot Lake, Ontario. His practice is mainly characterized by a minimalism of geometric forms that will develop at a time when the Quebec art scene is undergoing a major transformation with the publication of the Refus Global manifesto (1948). Furthermore, he is fully involved in the development of an artistic culture in his hometown. He exhibits and participates actively in several venues located in Trois-Rivières, such as the Biennale nationale de sculpture contemporaine, the Galerie du Parc and the Fenêtre, centre d’immersion aux arts. His artworks have been acquired, among others, by the city of Trois-Rivières, the Musée d’art contemporain and are also part of some private and public collections in the United States and Europe. One of his most significant works, entitled Le couple (1978), can be found in the Place d’accueil of the UQTR. In the 20th century, sculptor Pierre Landry is an important figure in the field of constructive geometric art in Quebec.