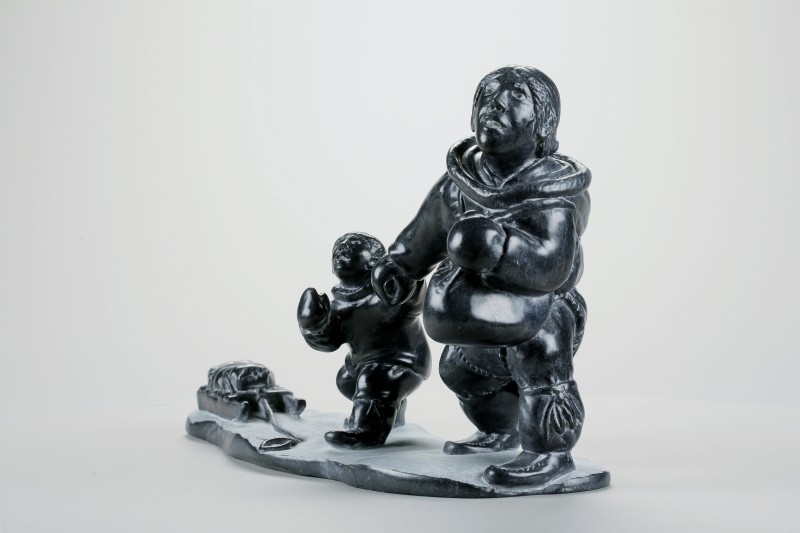 Peter Qumaluk Itukalla, or “Peter-Boy” as some call him, is an Inuit artist-sculptor, born in Puvirnituq, Quebec. He discovered sculpting at the age of eight through his parents. He and his sculptor brother, Joanassie Jack Itukalla (1949), come from a family of artists, including their uncles Levi and Inukpuk Qumaluk, Joe Talirunili and Davidialuk Alasua Amittu. In 1976, his life took a major turn when he participated in the Willowdale sculpture exhibition in Ontario and made the decision to become a professional sculptor. His work is characterized by a very dynamic style, and the depiction of his characters and animals often shows dramatic poses. Among his pieces are a bear driving his claws into the stomach of a walrus, or a child grabbing a piece of meat offered by his mother. Additionally, Peter-Boy Itukalla often depicts nude characters to accent the theme of vulnerability. In 2010 and 2013, with his brother Joanassie Jack and the British sculptor Mark Coreth, he participated in the international project Polar Bear on Thin Ice. The piece, initially Coreth’s idea and in reaction to the issue of global warming, consists of an ice bear melting from the surrounding, human heat, revealing its 400-kg bronze skeleton. The entire piece weighs 6,000 kg. The Polar Bear sculpture was shown from 2015 to 2016 in front of the Maison du développement durable in Montreal.