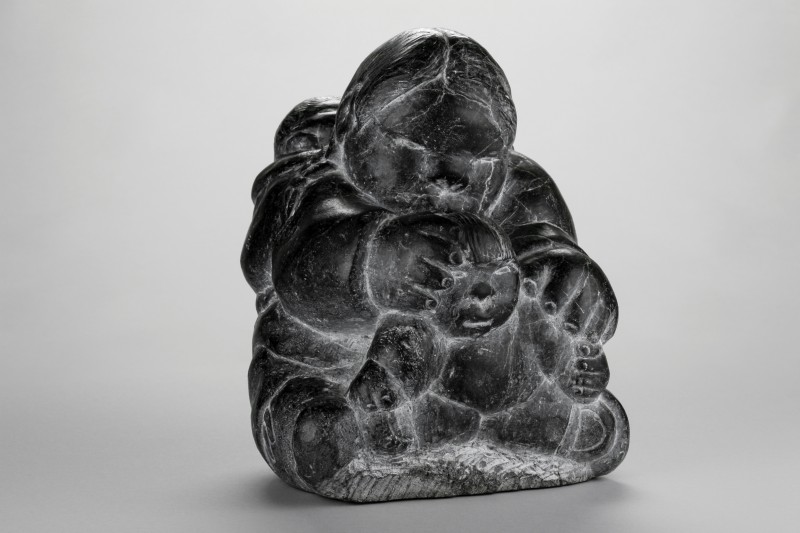 Born in 1911 in Kuujjuarapik, Quebec, sculptor Johnny Manumi Inukpuk moved to Inukjuak in the 1950s and lived there until his death in 2007. In Inukjuak, he met artist, author and filmmaker James Archibald Houston (nicknamed by the Inuits “Saumik” or “left-handed”) who encourages him to continue his sculpture work begun before the move. Johnny Inukpuk’s recurring themes are educational, domestic and hunting activities. His characters are distinguished by their eyes made from soapstone, ivory or melted vinyl records, and by their head which, as early as 1954, appears round and brilliant. In addition, women’s faces are often depicted with a cleft lip and palate, commonly known as a harelip, a malformation that his wife Mary Inukpuk had. In addition to his many sculptural works, he also produced a stone engraving entitled A True Story of Johnny Being Attacked by Three Polar Bears While In His Igloo (1974). This medium seemed to him more appropriate than the sculpture to recount this hunting experience that he has, it seems, lived. In 1951, TD Bank Financial Group acquired an Inukpuk coin Hunter (1951), a stone sculpture measuring 49 x 37 x 21 cm. In 1953, he participated in the exhibition “Eskimo Carvings” (known as “The Coronation Exhibition”), presented at the Gimpel Fils Gallery in London, England. He was elected to the Royal Canadian Academy of Arts in 1973.