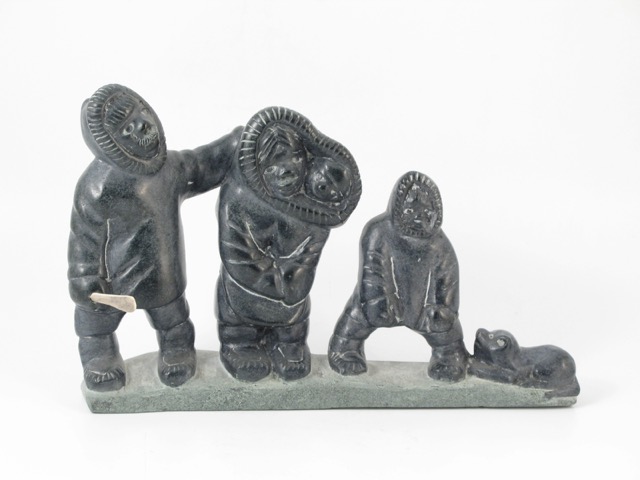 Born in Salluit, Quebec, Tivi Ilisituk is one of the most famous sculptors of his region. He began sculpting as a pastime, while he preferred spending most of his time fishing and hunting. His sculptures from the 1950s and 1960s are characterized by the use of a gray stone found near the Kovik River. In his sculptures, the characters were depicted in scenes of daily life. The lines of his first sculptors were so well carved that the folds in the clothing and the braided hair seemed almost real. They accented descriptive elements as well as movement and depth. Starting in the 1970s, Tivi Ilisituk’s work became less rhythmic and focused mainly on hunting and animal subjects. In 1967, he gained success when one of his pieces was shown at the Winnipeg Art Gallery’s prestigious Eskimo Sculpture exhibition in Manitoba. During his long career, the artist had two solo exhibitions: Sculptures by Tivi Ilisituk, in 1970, at the Becket Art Gallery of Hamilton, Ontario, and Tivi Ilisituk: A Study in Cultural Realism, shown at Arctic Artistry in New York in 1986. His sculptures are today part of large national collections, including the Royal Ontario Museum, the Canadian Museum of Civilization, the Winnipeg Art Gallery and the National Gallery of Canada.