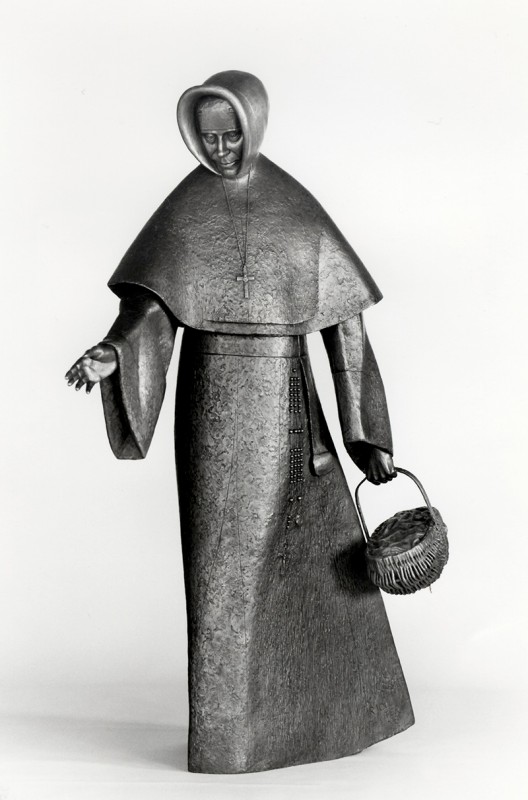 Raoul Hunter graduated from the École des beaux-arts de Québec in 1953 and later studied at the École nationale supérieure des Beaux-Arts in Paris. From 1956 to 1989, he was a caricaturist at Quebec’s Le Soleil newspaper and a professor at both the École des beaux-arts de Québec and the École des arts visuels at Université Laval. His many sculptures comprise religious as well as secular works, notably the bronzes of Jean Lesage, René Lévesque and Samuel de Champlain (1967) on the façade of the Quebec Parliament Building; the Monument funéraire d’Alphonse Desjardins in Lévis; and the Monument à Félix Leclerc in Île d’Orléans. In 1999, he was selected to cast the Monument à Mère Émilie Gamelin, located near the park named for the beatified nun at the entrance to Montreal’s Berri-UQAM subway station. The sculpture depicts Mother Gamelin dressed in the habit of her order and holding a basket of food. The basket is a reminder that, as the founder of the Congregation of the Sisters of Providence, she established “l’Œuvre de la soupe,” a soup kitchen that served food to the poor for more than a century. Hunter was awarded the 1967 Centenary Medal and the 1989 Prix de la culture de l’Institut Canadien de Québec. He is a Member of the Order of Canada (1989) and of the Académie des Grands Québécois (1998).