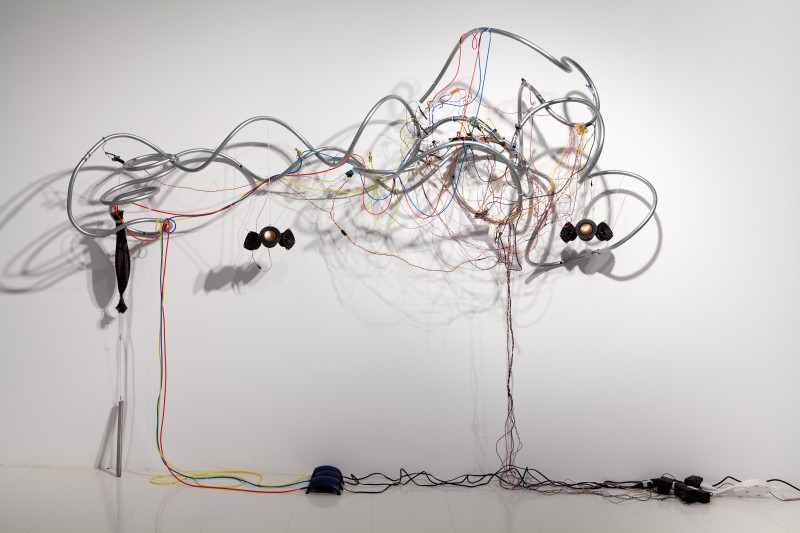 Present on the contemporary art scene since the mid-1990s, Jean-Pierre Gauthier creates kinetic, auditory sculptures. A Matane, Québec native, Gauthier studied visual arts at the Université du Québec a Montréal where he earned a bachelor’s degree in 1990 and a master’s degree in 1995. An artisanal handyman of sophisticated machines and self-proclaimed noise musician at times, he is known for his sonorous installations—true contraptions that produce sounds triggered by automatic controls and electric motors. These installations can be presented autonomously or in the framework of a performance. During his performances or concert-installations, the notion of duration limited by time makes the difference. Moreover, the artist’s presence adds an interesting dimension because he is able to make changes, constantly intervening in the sonorous process. He has exhibited work in Quebec, elsewhere in Canada and several countries, such as the United States, Korea, Brazil and Mexico. He has also participated in major collaborative exhibitions, including the 2nd annual Montréal Biennale in 2000; Le ludique, an exhibition presented at the Musée national des beaux-arts du Québec in 2001; Smile Machines, as part of Transmedial.06, presented at Die Akademie der Künste (The Academy of Arts) Berlin in 2006; Tonspur_expended, The Loudspeaker in Vienna, exhibited in Austria in 2010; and Despetar/Éveil, at the SESC in Sao Paulo, Brazil in 2013. Notable among his solo exhibitions are Ceci n’est pas une machine at EXPRESSION in Saint-Hyacinthe in 2014 and Orchestre à géométrie variable at B-312 in Montréal in the same year. He received the prestigious Sobey Art Award in 2004, the Victor Martyn Lynch-Staunton Award in the visual arts category in 2005 and Montréal’s Louis-Comtois Award in 2012. His work belongs to several collections, including that of the Musée d’art contemporain de Montréal, the Montreal Museum of Fine Arts, the Art Gallery of Nova-Scotia and the Baltimore Museum of Art.