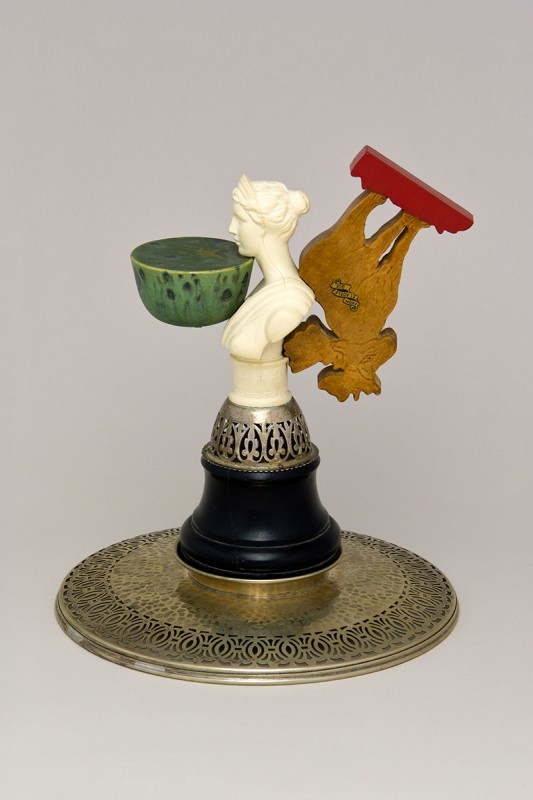 Ceramist, writer and teacher Léopold Foulem studied at the Alberta College of Art and Design and completed an MA at Indiana State University in 1988. He received the 1999 Jean A. Chalmers National Crafts Award, the 2001 Saidye Bronfman Award for excellence in the fine crafts and the 2003 Prix Éloizes for artist of the year in visual arts. His work has been exhibited in numerous museums both in Canada and abroad, including the Gardiner Museum, the Los Angeles County Museum, the Montreal Museum of Fine Arts, the Canadian Museum of Civilization (now called the Canadian Museum of History), the Winnipeg Museum of Fine Arts and the Victoria and Albert Museum. Through abstraction, ready-mades, bricolage and Pop art, he re-examines the notions of genre, good taste and the paradox of three-dimensional objects versus the two-dimensional image. Incorporating well-known figures in popular culture, such as Mickey Mouse, Colonel Sanders, Santa, the Mounties and even priests, he creates humorous and provocative artwork intended to showcase ceramic as an artistic discipline – in other words, as more than simply a technique, material or useful object. In 2014, he was the subject of a major exhibition at the Musée national des beaux-arts du Québec.