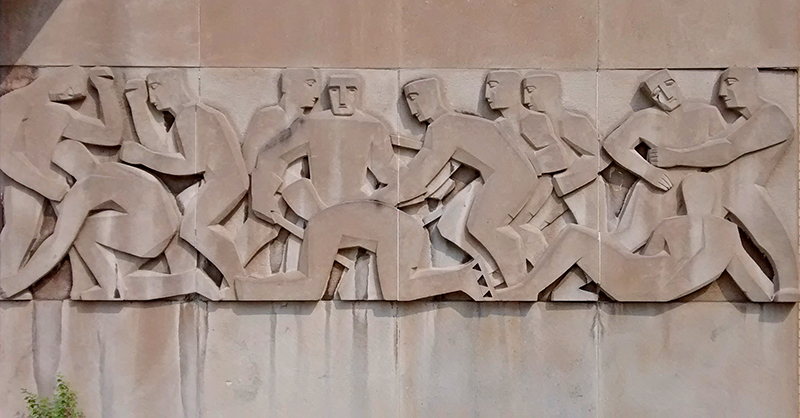 Armand Filion led a dual career as both a sculptor and a professor. In 1953, he received an Award of Excellence from the Royal Architectural Institute of Canada (RAIC); he also placed second in sculpture that year at the Concours artistique de la province de Québec, later earning first prize in 1959. He was a member of the Royal Canadian Academy of Arts, the Sculptors Society of Canada and the former Association des Sculpteurs du Québec. Filion produced primarily figurative work, representing the human body through an evolving variety of styles and materials. His preference for pure and stylized forms gradually progressed toward a more geometric approach, eventually developing into abstraction. His interest in architectural sculpture led him to collaborate with architects on numerous sculptures and murals: these include Vierge (“virgin”), a freestanding statue (c. 1952) on the façade of Collège Édouard-Montpetit in Longueuil, and low reliefs for the main entrance to the Maurice Richard Arena in Montreal (1960). His work may also be found at the Gadbois recreational centre in Saint-Henri, École Sainte Bernadette-Souberudit.org/…1666/espace1050785/9215ac.pdfirous in Montreal, École de Danville in Asbestos and the Saint-Nicolas church in Montreal.