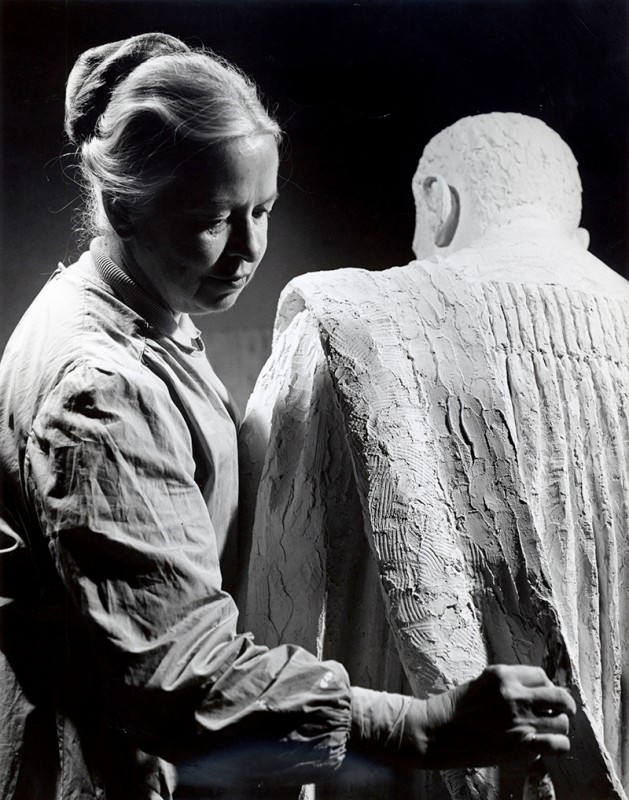 Considered Quebec’s first female sculptor, Sylvia Daoust studied drawing and model sculpture at the Conseil des Arts et Manufactures (1915-1916) and at the École des beaux-arts de Montréal, where she won a Premier prix de sculpture in 1928. Upon returning from a stay in France, she became a professor at the École des beaux-arts de Québec in 1930, later teaching at the École des beaux-arts de Montréal until 1968. Her many prizes and medals include an appointment to the Order of Canada (1976) and the title of Knight of the Ordre national du Québec (1987). Her first major commission was a bronze of Brother Marie-Victorin, unveiled at the entrance to the Montreal Botanical Garden in 1951; the project proved controversial at the time, as many were opposed to the idea of a woman completing the sculpture. Notable examples of her other monuments are Édouard Montpetit at the Université de Montréal (the three monoliths surrounding Montpetit represent the subjects he taught: law, economics and sociology); Marguerite Bourgeois and Marguerite d’Youville at Montreal’s Notre-Dame Basilica; Jeanne d’Arc at St. Joseph’s Oratory; and the Virgin Mary in the apse of the Mary Queen of the World Cathedral. Daoust’s work remains true to the religious art of Greco-Latin and Christian culture while avoiding overly sentimental tones; her style blends tradition with modernity, producing generally hieratic figures and forms that are kept simple, delicate and refined. In 1974, the Musée du Québec held a comprehensive retrospective of her work.