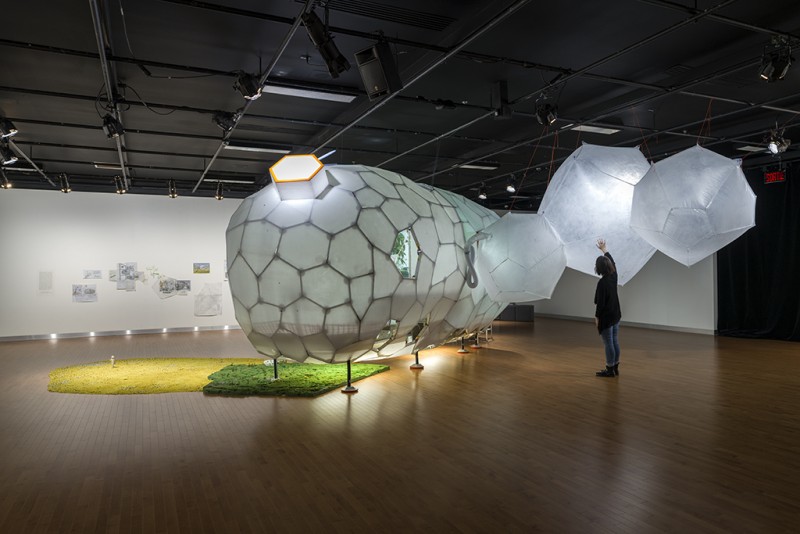 Daniel Corbeil is native of Val D’Or and holds a master’s degree in visual arts from the Université du Québec à Montréal. He now lives and works in Montreal. His artistic practice mainly consists of installations and photography. By addressing a landscape influenced by industrialization and urbanization, he was able to incorporate his environmental concerns into a critical plastic aesthetic. By doing so, he questions our perceptions of the world and our ability to intervene and manipulate it. For example, Module de Survie, presented in 2018 at the Salle Alfred-Pellan of the Maison des arts de Laval, discussed a futuristic world in which nature would have regained all its strength on our environment deprived of its natural resources. He is also known for his participation in solo and group exhibitions in various cities throughout Quebec, as well as in Canada and abroad, such as Switzerland ( (12 Artistes canadiens contemporains, Galerie Horber, Lausanne, 1996), France (Gothic, installation, Château du Val-Freneuse, 1998) and Danemark (Corps en mouvement : double vue, Musée d’art contemporain de Roskilde, 1998). In addition, he is the author of some public works visible at Hôpital Sainte-Justine (Cabinet de curiosité, Montréal, 2005), at C.L.S.C. Le Partage des Eaux (Réseaux tourbillonnaires, Rouyn-Noranda, 2002), and at the Maison de la culture d’Amos (Sentinelle nordique, 2000). His works have been acquired by several institutions such as the Musée d’art de Joliette and the Musée national des beaux-arts du Québec, as well as by Loto-Québec and the City of Montreal. He is also the holder of the Prix Graff (2007).