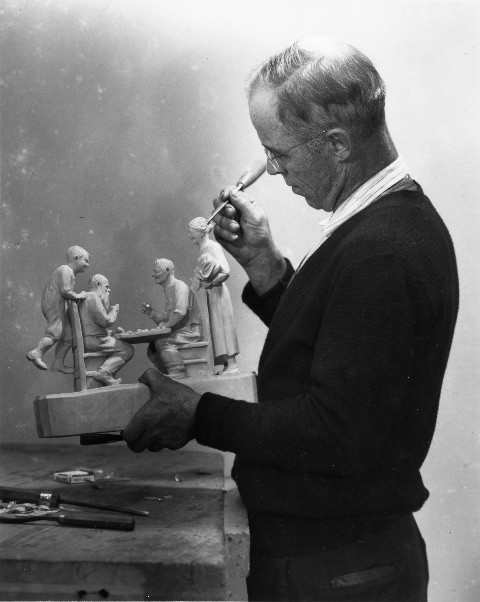 Born into a family of joiners and carpenter, the master-sculptor André Bourgault lived the majority of his life in his hometown, Saint-Jean-Port-Joli. At the age of 16, he began work as a merchant shipper. After several years on the sea, he joined his brothers Médar (1897-1967) and Jean-Julien (1910-1996) as a self-taught sculptor. At the beginning of the 1930s, the brothers Bourgault, also called “les trois bérets” (the three berets), began producing artisanal wood sculptures. In 1940 the provincial governor allowed them to establish the École de sculpture de Saint-Jean-Port-Joli. Over the years this important institution attracted many young artisans who wanted to learn the art of sculpture. The wooden works of the Bourgault brothers became very popular because of their folkloric and traditional themes, which focus on the rural and religious values of Quebec. André Bourgault was recognized by his peers as a great sculptor in his time, working several years in the workshops of the École de sculpture of Saint-Jean-Port-Jolie. During his career he became a member of the Canadian Handicrafts Guild of Toronto. His works are exhibited at the Musée de sculpture sur bois des Anciens Canadians in Saint-Jean-Port-Joli and the McCord Museum in Montreal, among other locations.