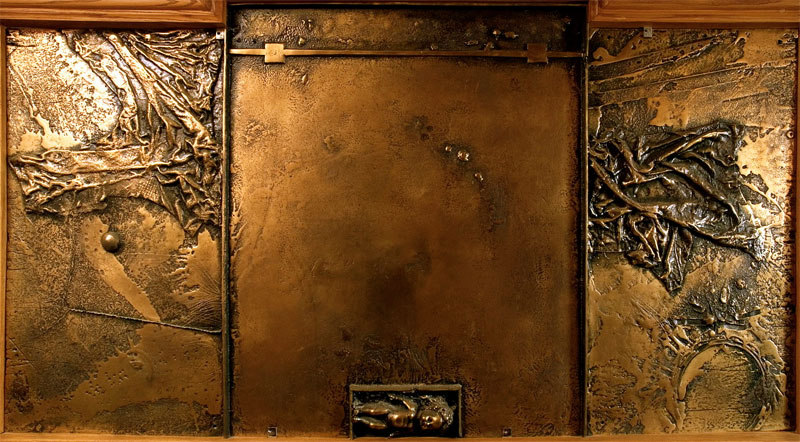 Jordi Bonet briefly attended the Real Academia Catalana de Bellas Artes de San Jorge in Barcelona before taking courses with painter and muralist Antoni Vila Arrufat, recognized for his religion-inspired compositions. Their encounter had a lasting impact, as Bonet would remain influenced all his life by religious, even mystic art. He immigrated to Quebec in 1954 and continued his studies in drawing and painting, eventually being introduced to ceramics with Jean Cartier. He taught for a short time at the École d’architecture at the Université de Montréal (1966-1968). As a painter, sculptor, ceramist and muralist, Bonet created more than one hundred murals around the world in ceramic, cement, and later aluminum and bronze; these include works for the New York World’s Fair in 1962, the Pavillon des Sciences at Université Laval, the North American Tower in Toronto, the John F. Kennedy International Airport in New York and the Pie IX Subway Station in Montreal. He was awarded the 1958 Prize for drawing at the Montreal Museum of Fine Arts’ Spring Salon and an Award of Excellence from the Royal Architectural Institute of Canada in 1965. He was also a member of the Cercle Maillol in Barcelona (1953), an associate member of the Royal Canadian Academy of Arts (1966) and a member of the Association d‘artistes professionnels du Québec (1966). In 1969, Bonet completed a controversial mural for the Grand Théâtre de Québec that featured a quote from poet Claude Péloquin: “Vous êtes pas écœurés de mourir bande de caves! C’est assez!” (“Aren’t you sick of dying, you gang of idiots? Enough!”).