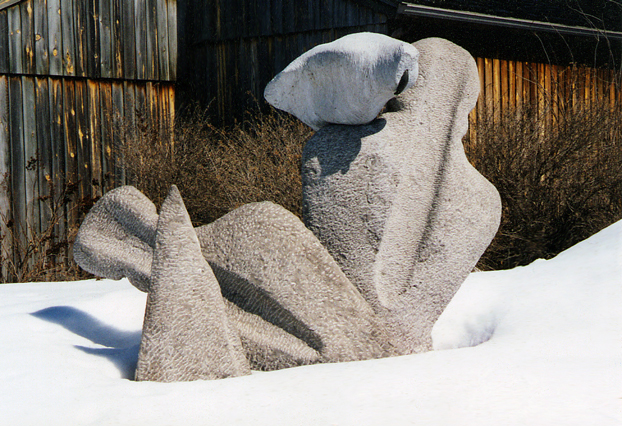 Originally from Saguenay-Lac-Saint-Jean, Serge Beaumont is a Quebecois sculptor who established himself in Saint-Césaire in the Montérégie region of Quebec. After studying sculpting in Saint-Jean-Port-Joli under Jean-Julien Bourgault, Serge Beaumont finished his education at the CEGEP de Joncquière in 1973 and earned his bachelor’s degree in studio arts at the Université de Québec à Montreal in 1981. During the 1970s and 1980s, the sculptor discovered his materials: steel, aluminium, wood, bronze and stone. He also likes to work with granite and concrete. Among his works are La Table des princes (1980), Pointes de Chasse (1985), Balbuzard et le poisson (1995), Le Cheval (1998) and a series of pieces created in 2000 in Japan with local materials. The defining characteristic of his sculptures is the mix of different mediums. His first exhibition took place in 1985 at the Samuel J. Zacks Gallery at York University in Ontario. The sculptor takes inspiration from organic forms from the plant world. He is also interested in fantastic imagery and tales and legends. Usually working outside, the artist takes advantage of the natural intervention that visually modifies the material surface of his pieces. For 40 years, he participated in a number of symposiums and solo or collaborative exhibitions. His works make up numerous collections in Quebec, but also at the Yamabiko Art Centre in Mishima, Japan.