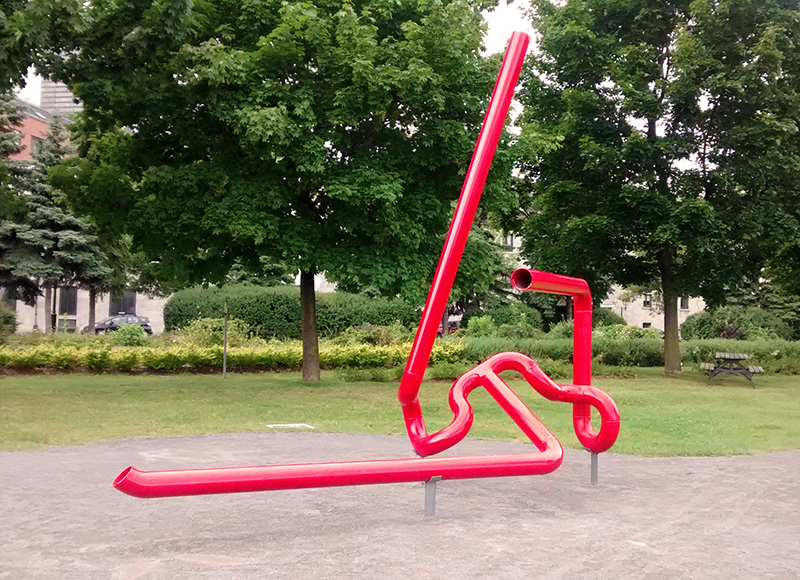 Marcel Barbeau studied at the École du meuble de Montréal from 1942 to 1947 and frequently visited Borduas’ studio from 1944 to 1953. In 1945, with Jean-Paul Riopelle, he experimented with abstract expressionism in painting and sculpture. A member of the Automatiste group, he signed the Refus global in 1948. Barbeau left Quebec in 1957 to return only in 1974, having lived in Vancouver, Paris, New York and California. In the 1960s, he gave up automatic surrealism for a process of slow refinement that bordered on the experimentation of the Plasticiens. He then became immersed in the kinetic world, to which he was introduced by the work of Vasarely, and discovered the Op Art movement. Barbeau draws upon other disciplines such as poetry, dance and music. He is a painter and sculptor, but is also interested in printmaking, collage, photography, interdisciplinary performance and public art, exploring various worlds such as surrealism, minimalism, kinetics, formalism and performance art. His work as a painter and as a sculptor has always developed along parallel lines. He has notably used sculpture as an alternative way of approaching the problems of emptiness and mass, light and space, encountered in the pictorial practice. His sculptures as a whole are abstract and often large-scale. Barbeau’s works have been exhibited internationally and can be found in most Canadian museums and a few public collections in Europe and the United States. He was awarded the Prix Paul-Émile Borduas in 2013.