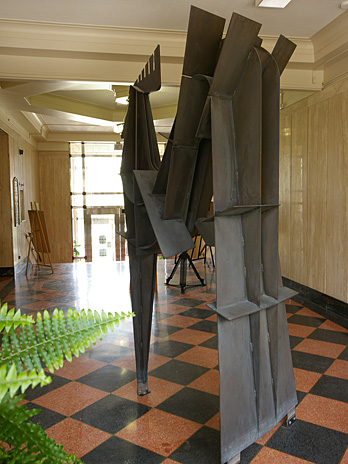 Louis Archambault studied at the École des beaux-arts de Montréal and participated in the debates between advocates of academic art and those of the avant-garde school. Refusing to support the Automatiste group, he signed the Prisme d’Yeux manifesto in 1948. Considered one of the pioneers of contemporary sculpture in Canada, he continued to make works for forty years. In the late 1960s, he began intensifying the geometric and abstract nature of his sculptures, increasing their monumentality and massiveness both spatially and symbolically. He had an international career as a sculptor: in 1951, he participated in the Festival of Britain, exhibiting his work in Battersea Park, London; he represented Canada at both the 1956 Venice Biennale and the 1957 Milan Triennale; and he participated in the Brussels International Exposition the following year as well as the 1967 Montreal Universal Exposition. His works integrated into architecture can be found in the Toronto and Ottawa airports, at Ottawa City Hall and at Place des Arts in Montreal. Archambault also taught at the École du Meuble, at the École des beaux-arts de Montréal, at McGill University and at the Université du Québec à Montréal. He received many honours, such as the Prix du Ministre in 1939 at the end of his studies at the École des beaux-arts de Montréal and the Centennial Medal in 1967. He became an Officer of the Order of Canada and member of the Royal Canadian Academy of Arts in 1968.