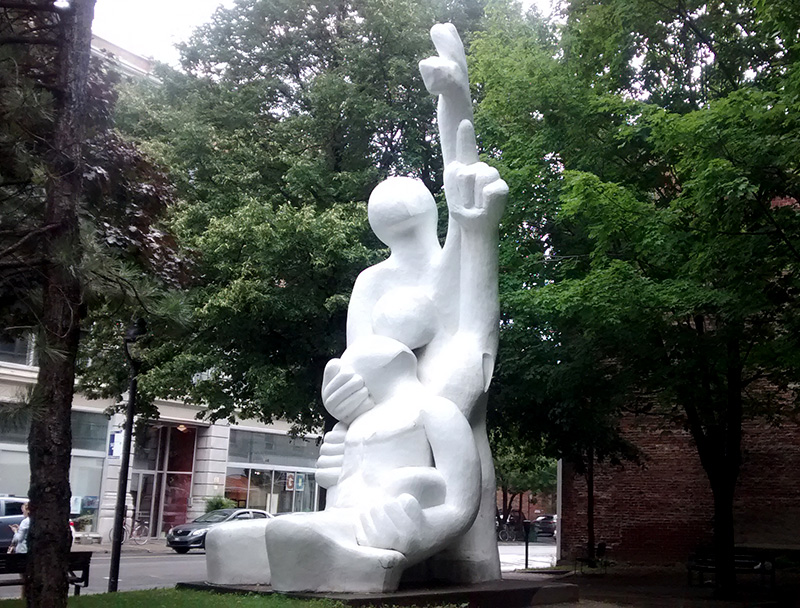 Born in Montreal, Pierre Yves Angers studied arts at the Cégep du Vieux Montréal. His work Le Malheureux magnifique (1972), inspired by Rodin’s Le Penseur (1903), is undoubtely his best-known work. It was produced for the competition “Sculpture en face” organized by the students at the Cégep du Vieux Montréal. Painted white, the crouching figure holds its head in both hands, symbolizing that the destiny of human beings is often too heavy to bear. At first, a phrase accompanied the sculpture: “A ceux qui regardent à l’intérieur d’eux-mêmes et franchissent ainsi les frontières du visible” (“to those who look within themselves and thus cross the boundaries of the visible realm”). Initially installed in Pasteur Park, it was moved in 1981, at the corner of Sherbrooke Street and Saint Denis Street, and acquired in 1991 by the City of Montreal. Another work, Les Clochards célestes (1983) – the French title of Jack Kerouac’s The Dharma Burns, published in 1958 – is in Miville-Couture Park at the intersection of René Lévesque Street and Amherst Street. The white sculpture, made of steel and cement, shows three figures that symbolise support for one another. The monument was given to the City as a tribute to the mission of the Maison du Père, a place for socially reintegrating the homeless located nearby. Pierre Yves Angers is a former president of the Conseil de la sculpture du Québec.