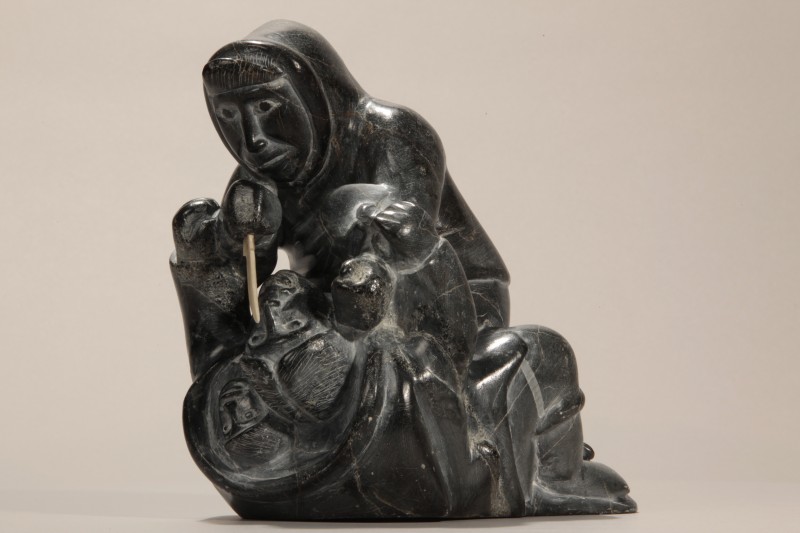 Inuit artist Davidialuk Alasua Amittuk was born in 1910 in Camp Nunagiirniraq (Quebec) and died in 1976 in Puvirnituq (Quebec), a Nordic village in Nunavik where he settled in 1951. Mostly known for his mythical storytelling tangled with personal memories, he produces works that represent several important aspects of the Inuit oral tradition. Amittuk began his artistic career at the age of forty and first made mainly figurative wood, ivory and stone sculptures: men fishing for fish, women caring for their children, animals injured during the hunting, etc. From the end of the 1950s, he was inspired by traditional myths and legends to create sculptures, drawings and prints, a body of work that would make him famous. His pieces refers, for example, to legendary creatures like Kajtajuk, a half-fish, to the story of Lumaaq, as well as ancient myths about the northern lights or a woman caught for the wife of an eagle. The artist also addresses issues of survival and depicts tragic events, such as murders. From the 1970s, he mainly made works on paper in which he often incorporates text. His themes are the same: traditional myths and legends, scenes of violence and personal stories, but he also discusses the first interactions between his community and white men. The artist passed away in 1976, a few days before the opening of a major solo exhibition, “Sculpture by Davidialuk”, taking place at Fleet Gallery in Winnipeg. An exhibition that will eventually become a posthumous celebration of his work. His sculptures, drawings and prints have been the subject of numerous exhibitions in Canada and abroad and have been featured in various publications. Many of his works are found in major collections of Inuit art, including those of the National Gallery of Canada (Ottawa), the Musée de la civilization (Quebec) and the National Museum of Fine Arts of Quebec (Quebec).