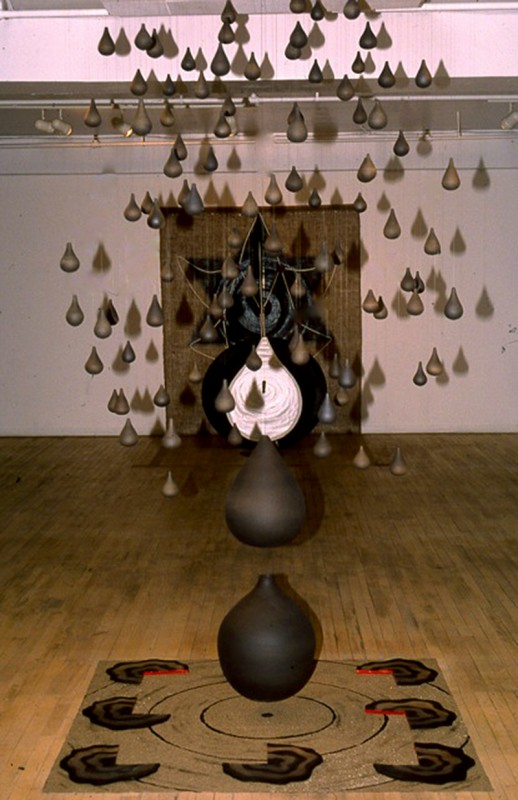 Indira Nair was born in southern India and received her BA in Bombay before continuing her studies at the Sorbonne and the École des Beaux-arts de Paris. In 1972, she settled in Quebec and completed an MFA (1992) at the Université du Québec à Montréal, where she taught from 1979 to 1997. Whether by means of printmaking, painting, sculpture or installation, her works reveal a spiritual and symbolic world that is often connected to her childhood. She chooses each material with care because it contributes to the very dynamic of the work: like the human spirit, all matter has a spirit of its own as well as an evocative power, one capable of opening the doors to an interior vision of material things and of the world. In addition to solo exhibitions, such as En Transit at the Centre d’exposition Circa (1993) and Un dialogue de tête et de cœur at Galerie 418 in Montreal (2001), Nair has produced several works integrated into architecture, notably for the Hôtel-Dieu hospital in Saint-Jérôme, the Terrebonne primary school and the Le Gardeur hospital in Repentigny. Her works can be found in private and public collections in Canada, including at the Montreal Museum of Fine Arts, the Musée national des beaux-arts du Québec and the Musée d’art contemporain de Montréal (coll. Lavalin), as well as abroad at the Bibliothèque Nationale de Paris.